The recently completed Providence Pedestrian Bridge is a welcoming and naturally beautiful marvel. The bridge features sustainably harvested Ipe hardwood decking. This tough decking is well known for its great looks, long durability and high performance. That’s why Ipe hardwood is the material of choice so many high pedestrian traffic areas including boardwalks and bridges.

For decades, the I-195 off ramp off I-95 in Providence was a traffic and safety hazard. And it split the city right in half.  It was a huge improvement when they re-routed and rebuilt this exchange. But the old demolished area left a scar behind that created a void in the city. The new bridge unifies the city and joins both the east and west sides of the Providence River.

Many proponents of the bridge are thrilled with the beauty, economic development potential and social aspect of the new bridge and walkway. Some opponents say it cost too much and there are other higher priority bridges in Rhode Island. All agree on one thing, though. The Providence Pedestrian Bridge is spectacular. 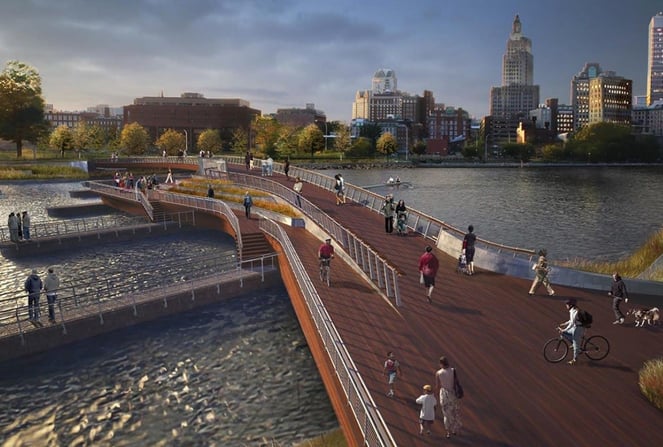 Inform Studios won the design competition in 2011. Some classical architecture enthusiasts originally objected to the modern look of the new bridge. But the natural beauty of the Ipe hardwood decking, railings, tables and benches, helped win them over. The curved structure is sleek, organic and stunning. 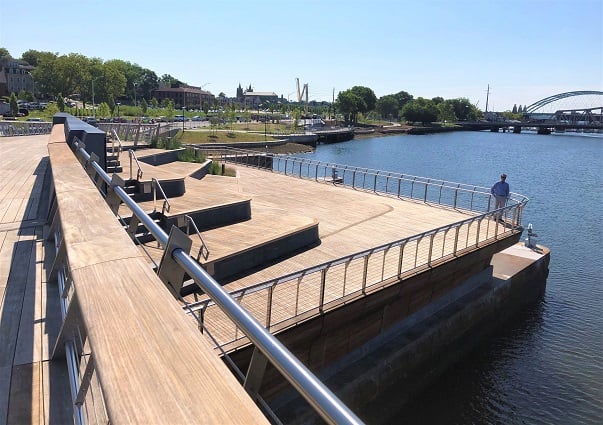 After many delays, construction finally began in 2016. To keep costs down, the original pilings of the old I-195 bridge were re-purposed for a new use.  The pilings provide an incredibly strong base for the new footbridge. And they fit right into the architectural design.  Daniel O’Connell’s Sons erected the bridge frame and constructed the decks. Much of the early construction work took place from barges in the river. 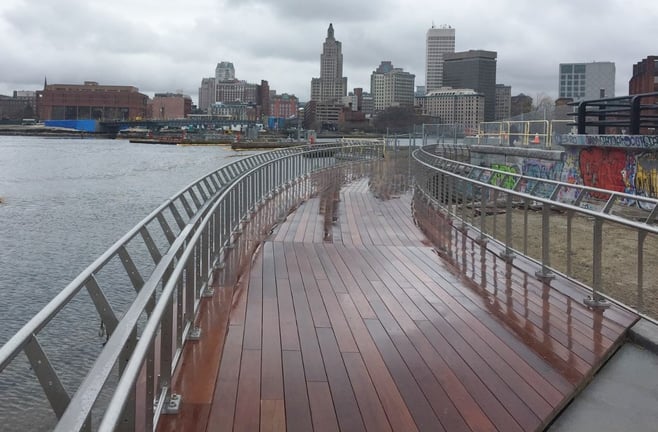 Ipe deck walkway on the east side of river, now adjoins the pedestrian bridge

The underside of the bridge features Wana wood. Wana is a hardwood that's been used extensively in shipbuilding for centuries. Indeed, the ‘below decks’ portion of the bridge design looks like an ancient wooden ship’s hull. The curved appearance adds grace and elegance.

Wana wood 'ship's hull' sits 'below deck', above the original I-195 pilings

Topside, on the ‘ship’s deck’, though, there’s a lot of exciting design elements. According to an article in the Providence Journal, RIDOT chief  stated, “Because of all the unique architectural elements, such as lighting underneath the rails, built-in chess boards, the hardwood decks, the decks made of a durable and long-lasting hardwood, decorative planters and special seating areas and terraces, this bridge will both be a means of transportation for pedestrians [and] also a destination for public enjoyment.” 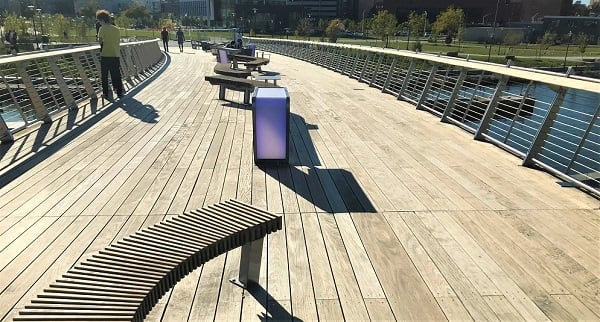 Ipe decking, railings and benches in the afternoon sun

Rhode Island Governor Gino Raimondo is on board, too. Per an article in the Patch: "The Providence River Pedestrian Bridge is an important new landmark for Providence and for our state.  By connecting Providence's historic East Side and its growing Innovation District, we are strengthening the fabric of this city. This bridge will help ensure that both neighborhoods continue to be attractive places to live, work, and visit for years to come." 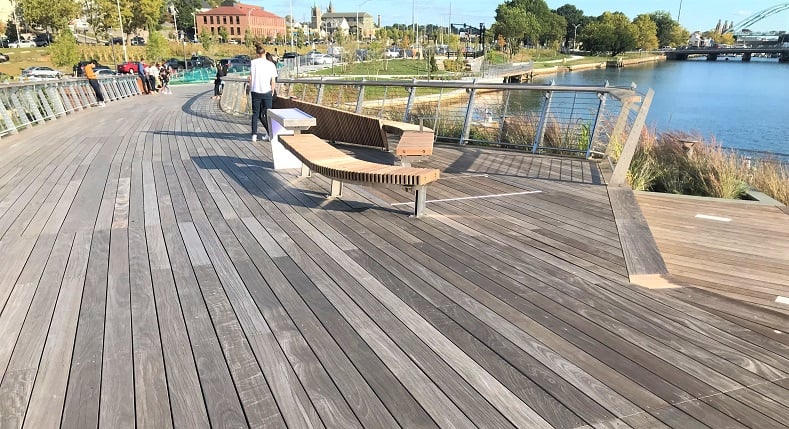 Ipe bridge and walkway, weathering nicely in this maritime climate

The bridge and its effect on the community, city, state and region also received high praise from Providence Mayor Elorza and US Senator Jack Reed.  Wow.  In an era when politicians rarely agree on anything, this is refreshing news. When you visit Providence, Rhode island, make this a 'must see' stop for a stroll.

We hope you enjoyed this article. Please browse the rest of our website for additional information about different types of hardwood decking and lots more.

Ipe hardwood has been used successfully for so many years, it has earned its well deserved ... 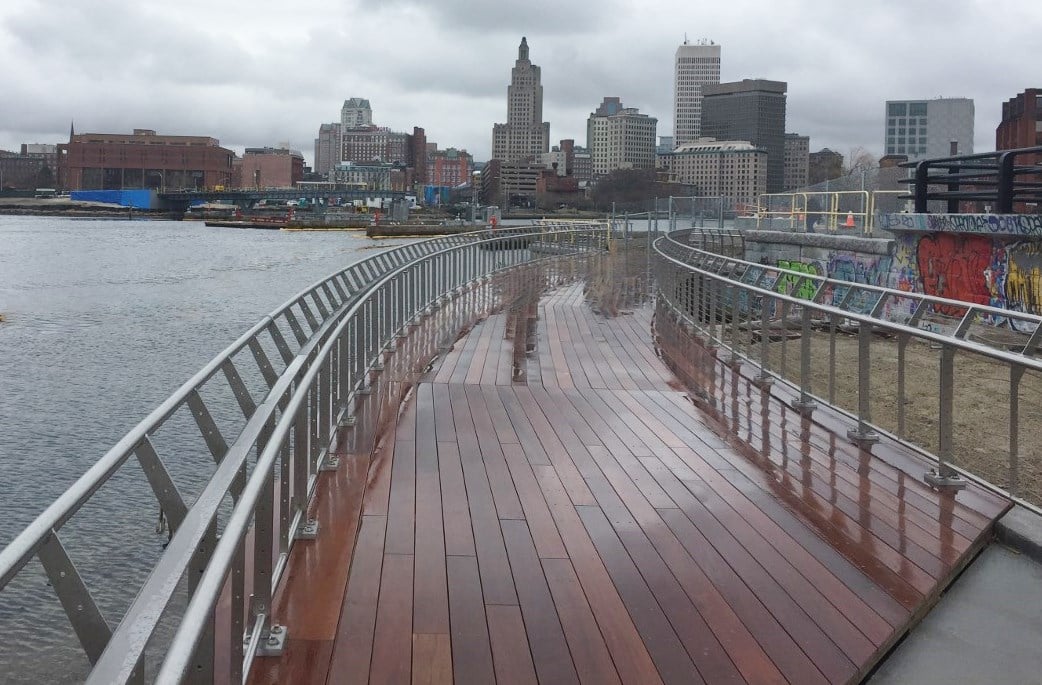 Providence, Rhode Island – On the south of the city, a spectacular renewal is underway. After they ...